The community spirit I wrote about in my recent post on the Highams Park Plan was much in evidence last weekend, as the community came together for a day of festive events which highlighted how much has been achieved in just a few short months.

First up was the launch of our three little free libraries, a project I’ve been involved in as part is the arts and culture group (ARC). Since the launch of the little free libraries project UK, with 12 installations in Walthamstow this simple but powerful idea has captured the imaginations of communities across the country, and the network of little free libraries seems to be expanding every week. These small wooden houses are each decorated by a local artist and hosted in residential, )or sometimes business locations and are available to all to leave, take, or swap a book. The combination of public art, literacy and community engagement embraced by this very simple idea shows the potential of grassroots activity. Small interventions can enhance an environment and positively impact people on a day to day basis.

Our three Highams Park little free libraries are situated across the area covered by the Highams park plan, and each artist’s design reflects a different aspect of our unique part of London.

Yvette Sargent’s Bee House on Handsworth avenue depicts book reading bees surrounded by the flowers that attract them, both reflecting the beautiful garden in which the library is situated and drawing attention to the declining Bee population and the potential impact of this.

Sam Johnson’s Design on Selwyn Avenue reproduces the Highams park signal box – itself recently saved by community action, and now undergoing a restoration and occasionally open to the public.

These three pieces of public art are, as local legend William Morris would have said, both useful and beautiful, and are already being used and enjoyed by people every day. We celebrated the launch of each of them with especially written poetry from local poets, and by swapping gift wrapped books as well as enjoying mince pies generously supplied by our hosts.

We followed this up with some late Christmas shopping at the Christmas craft market – where the majority of stalls were run by local artists, as well as a representation from a number of local businesses including xylonite arts, grace and albert cook shop and the recently relaunched royal oak. We finished the day with a mulled wine singing carols with people from across the area. That all of these events were organised by local residents, working entirely voluntarily made the event feel very special and a true celebration of the talent and entrepreneurial spirit in our area. As we look forward to 2015, which will amongst other things see the formal creation of our local area plan it is really exciting to think ahead and imagine how all these initiatives will develop over the coming year.

When I was a true Walthamstowvian, Highams Park existed as a station before Chingford and little else. Although I am sure it is now known to more local residents (who probably call it Highams Green) since the opening of Tesco last October, it still feels unlikely that it is a destination in its own right for many – and perhaps particularly so for runners from elsewhere in Waltham Forest, who are more likely to see Chingford Plain as the gateway to long cross country routes in Epping Forest and use the marshes for their shorter off road runs.

Highams Park itself, and the neighbouring lake, offer a short run combining paths, grass and forest trails, providing one of the most panoramic views of the City anywhere in Waltham Forest and varied wildlife spotting opportunities to say the least. Though I’ve more than once been startled by rats darting across my path, I’ve also seen bats when out running at dusk, and some of the largest dragonflies I’ve ever come across.

A circuit of the lake or park is easily incorporated into any number of longer routes but here is a suggested c. 5km – easily reached from the station (Chingford to Liverpool Street line) so perfect for a quick after work escape for Walthamstow dwellers.

The gateway to the forest

Exiting the station at the clock tower side (not Tescos side) Highams Park itself can be quickly reached with a few minutes jog up Handsworth Avenue, taking a right turn it crosses with Falmouth avenue and left into Tamworth Avenue. My preferred route however , uses Vincent Road and reaches the park with a short detour through a sliver of forest which somehow remains in the middle of the relatively built up area. I always think of the path through this attractive wood as my gateway out of London – from here, barring one or two road crossings, it is actually possible to run through forest all the way up to the M25 at Epping. 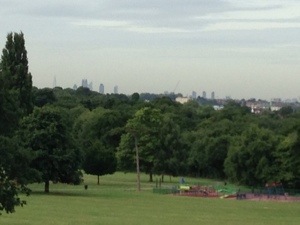 The City – View from the Edge

Most walkers through the park stick to the paths, and it was only when I started running that I went right round the perimeter and realised what I was missing. It’s not flat by any means, but a lap or two is more than rewarded by a view of the City from the top. This view, more than anything brings home the fact that we are truly On The Edge of the capital.

Down along at the bottom of the park there’s more than one gateway/ stile which will lead you into the forest and onto the path which goes right around the lake. It is to me one of the most beautiful parts of Epping forest.

The mud tracks stay relatively clear most of the year round, though this part of the run can feel like proper cross country at certain times. The River Ching (which gave Chingford its name) runs alongside the lake – there is a path between the lake and the river, as well as a bridge which takes you to another (often drier) path on the other side. I normally do two laps of the lake, and run both these paths. Emerge onto the road and take a right turn to set you on course back towards the station.

Highams Park Forum has lots of information about the area, including an interesting history http://www.highamsparkforum.co.uk/history.html