Writing about Jonathan’s work and the transformation of the Lee Valley in my last post reminded me of Saint Etienne’s film What Have You Done Today, Mervyn Day? Made in 2005, the film is set on the day following the announcement of London’s successful Olympic bid and follows the teenage Mervyn on a bike ride through the Lee Valley and the area now dominated by the Olympic Park.

With scenes and voiceovers featuring the real life characters of the area the film was a timely documentation of a landscape and community on the brink of transformation through one of the biggest developments in London’s history. Scenes which stick in my mind include one in a warehouse, which may well no longer exist, filled with the largest imaginable collection of tiles piled floor to ceiling in haphazard and frequently collapsing piles, and Mervyn being served bubble and squeak in a classic East End cafe – another rapidly dying institution. Built into the narrative are reminders of the Lee Valley’s industrial past, including the invention of plastic in Hackney Wick.

I haven’t seen the film since its premiere in 2005, during which the band played the soundtrack live (and also played their excellent album Tales from Turnpike House in the second half) but there’s a trailer on YouTube – with a tantalising hint of a DVD release this year in the comments. The film is well worth trying to seek out, and already and important historical document. 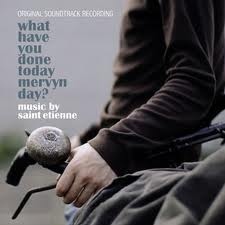 3 thoughts on “What have you done today, Mervyn Day?”